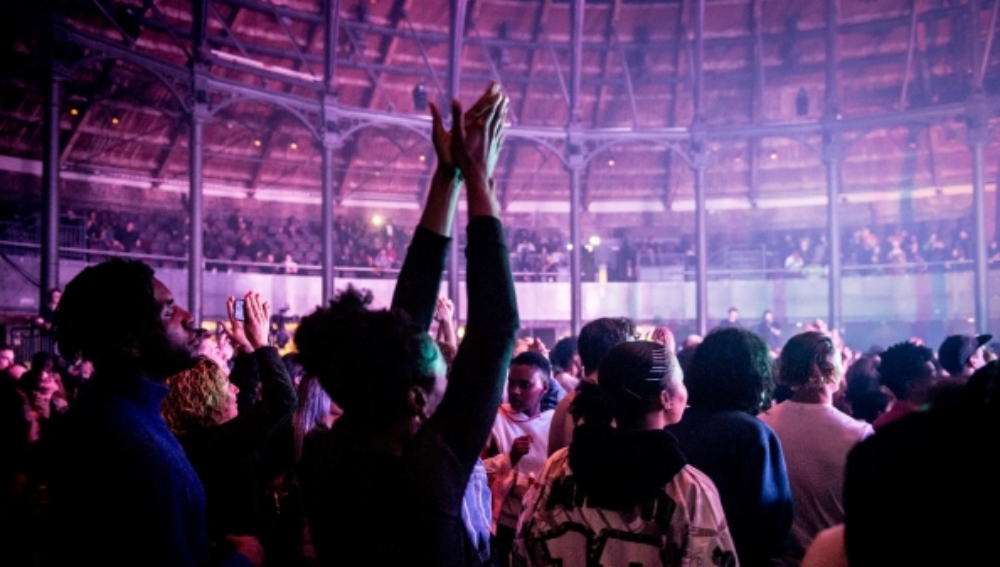 As the festival of emerging talent kicks off, we speak to Lucy Wood, Head of Music at the Roundhouse about the joyful return of live gigs
MUSIC IN CAMDEN
Why Read This?

Running from today (19th) until 23rd October, the Roundhouse Rising festival makes a welcome return to the real world after last year’s Covid-enforced virtual edition. It’s a celebration of emerging talent through a combination of gigs, workshops and industry panels. With headliners including Jerkcurb, Natanya and Shay D, and past performers such as Little Simz, Kojey Radical and Greentea Peng now making names for themselves, this festival is one to watch.

Head of Music at Roundhouse, Lucy Wood, believes music can facilitate communal healing, and has been revealing to us how her own career has been shaped by the opportunities that still abound here in Camden.

“Music making and creativity in general is a way of re-engaging with other people,” she tells us. “Music provides a space for self-expression and catharsis. It is the healing we need, re-bridging and bonding people socially.”

Lucy’s life has been shaped by following her passion. “As a child and then a teenager, I could identify people I would get on with because of their love of music. When I musically came of age around the rise of Britpop, Camden was a dream of mine – the ultimate destination. I thought I could just go to the Good Mixer pub and hang out with all these people.”

The first guestlist she found herself on was at The Electric Ballroom. At the after party, she got to meet Tim Wheeler from Ash. “As a 16-year-old that was unbelievably wonderful and fed into my desire to be close to music.”

Years later, she found herself working at Warp Records in Gospel Oak, and then for promoter Eat Your Own Ears, which put on shows in Camden venues like Dingwalls (now PowerHaus) and KOKO. “Camden is deeply intertwined with my music life. It felt much more under the radar when I  was a teenager, it was more hodgepodge. Now it seems more designed. I still see different subcultures like I did back in the late 90s, that undercurrent still exists. It’s still a magnet for music.”

The pandemic has, unsurprisingly, been tough for a venue like the Roundhouse. But difficulties aside, Lucy says there have been some moments of light. “We spent some of the time we had reflecting on values and plans, how ambitious we can be.”

It also brought home how important being together is, to share those live music experiences. “The first few shows we’ve had have felt like a dream. I started my job thinking I would be going to night after night of amazing shows and then the pandemic hit. But now it’s finally happening.”

She tells us a lot of her colleagues are experiencing the same joy and disbelief. “It’s like Oh my God, it’s really real. A lot of my colleagues and I spend time sitting behind computers and the payoff is the live shows. We do the screen work for that joyful epiphany.”

On the future of the arts sector, Lucy is optimistic. “I think people will always want to make music. That will happen and exist at every level. There will always be new artists wanting to create things and there always be audiences that want to listen. The industry will expand and contract but ultimately there’s going to be that desire for people to come together and listen to music.”

With the prevalence of mobile phones, she suggests that technologies will evolve in the gig setting, as will social behaviour. Even the role of women in gig audiences is different now. “Where we stand, how we feel, how other people treat us, has evolved. I think we might have a strange transition period coming back to live music where we get used to being around each other again but after the first few gigs it’s clear that people are just raring to go. They’re happy to be in that space with each other again.”

What about the future of the Roundhouse? “A very personal desire is that I’d love Iggy Pop or Dolly Parton to play here!” From the perspective of the organisation, greater representation of Black music genres is paramount. “The work we do in our studios with young people should be reflected on the stage in our main space. It sounds obvious when you say it and it’s something we’re working towards.”

What concerts stand out for Lucy? “I saw Prince at the Electric Ballroom. It was just extraordinary to see him that close and he was an absolute legend. Hit after hit.” At the Roundhouse she loved the Deer Hunter and Kate Lebon show, as well as MF Doom, Four Tet and Sharon van Etten. I ask Lucy to recommend me one album or artist and she shudders. After some thought she goes with Lorraine James. “She makes the kind of music I used to work on at Warp, but for now. It’s really inventive, glitchy, electronic dance music. She’s really cool.”

Looking back, does Lucy have any wisdom for her former teenage self? “As an eighteen-year-old, I was overwhelmed with wondering what I was supposed to do with my life. Where was I supposed to go? Who am I? I think saying yes to everything, and trying not to worry too much is the best thing you can do. The more you try, the clearer the trajectory becomes. Do as much as possible.”

Roundhouse Rising Festival is a great thing to say yes to. With a four-day line-up packed with industry talks and performances by emerging talent, there’s so much to experience and learn.

More info and to take part