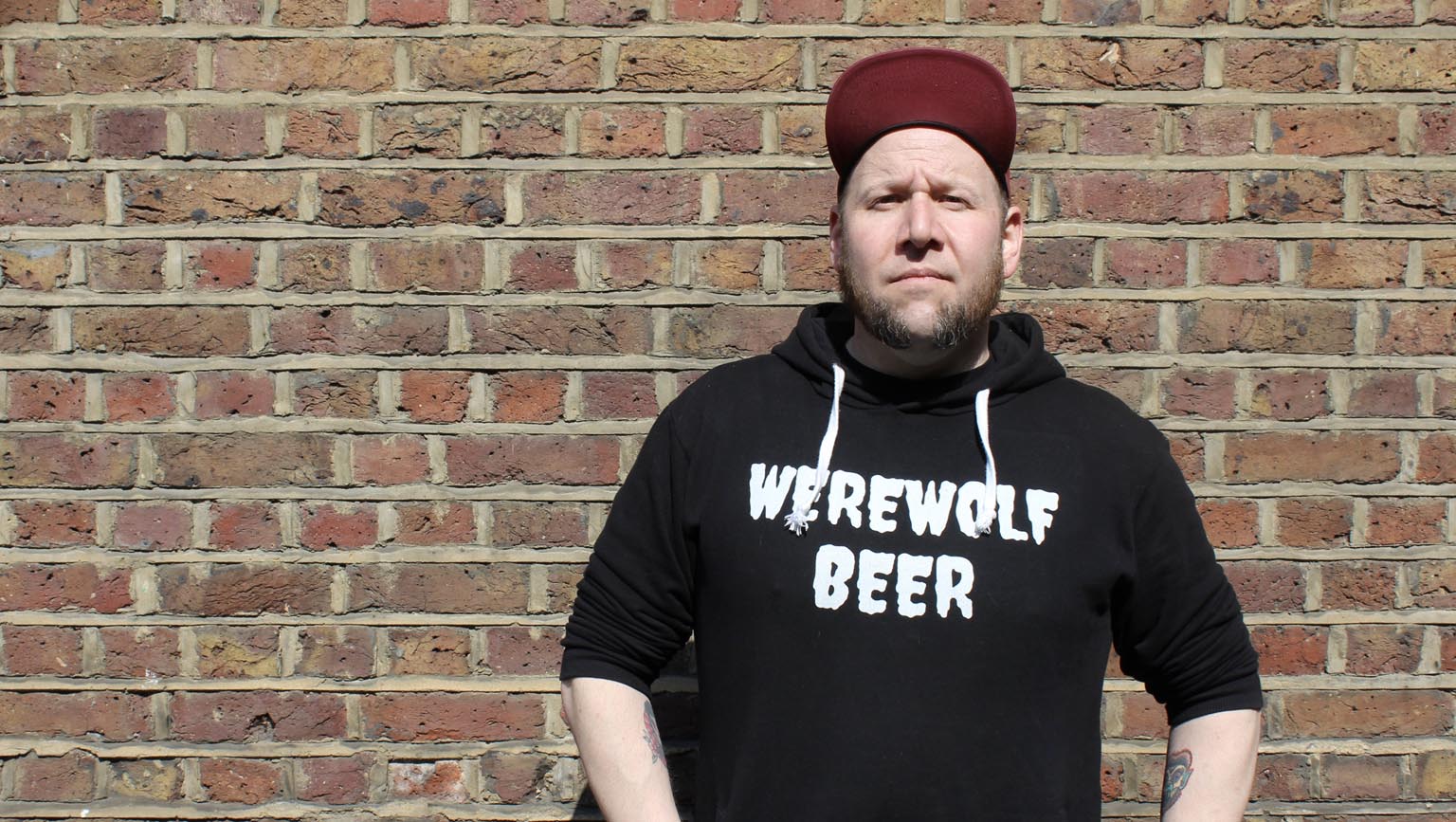 As someone who had a mohawk until his late twenties and owned “more leather jackets than a normal human should be allowed”, moving to Camden felt like coming home to Rich White. He describes Camden’s spirit as welcoming and unpretentious. “Camden is Peter Pan. Do whatever you want as long as you’re not bothering anyone else.”

Rich grew up in America and his experience of the beer industry there has shaped his approach to brewing now. As a university student in the States, he couldn’t legally drink, “you can vote, die for your country and have sex but you can’t drink a beer anywhere. You have to sneak around. So we would end up at horrible house parties drinking Milwaukee’s Best Ice from a keg” before upgrading to Guinness: “I could pour the shamrock from a can – what a wanker!”

After moving to downtown Syracuse, New York, he discovered Clark’s Ale House, fashioned after a London pub and serving real ale and roast beef sandwiches and even boasting a phone box. This is where Rich got into American craft beer, eventually home brewing. “I started working at brew pubs as a night job. I made some really good beer and some really bad beer.” Then he moved to London and discovered breweries like Kernel and Redemption. He was directed to The Bull in Highgate where London Brewing Company was founded and started as assistant brewer, eventually moving up to head brewer.

“Beer is a hobby that you can make fit into whatever you’re interested in, it’s expressive. It can be very personal.” Approaching forty and having spent the last five years working in the same place, Rich decided it was time to “do the thing I’ve been saying I wanted to do since I was 20 and I’ve been working on Werewolf ever since.” The name comes from John Landis’ 1981 horror comedy An American Werewolf in London. “That’s the story of my life. An American that goes on holiday to London, ends up falling in love with an NHS employee, and then makes a lot of people in London kind of angry.” The vision is to make American style craft beer, a nod to what Rich was drinking when he discovered his passion in the early 2000s. “I want to make these clear, balanced, good mouthfeel beers that are accessible but great quality.”

Siren Craft Brew: “As a brand, as a business and as brewers they’re awesome.”

The Black Heart: “Everybody gets on and just has a good time.”

At Werewolf there will be a core range, but Rich is also keen to pursue more experimental avenues. “Some of them are going to focus on the visual impact of beer. We’re going to make beers that are unusual colours using novel ingredients.” Not sure whether you want to drink green beer? Have no fear, Rich says, “they’ll have to taste good as well, it won’t be me chucking food colouring in, we can use ingredients like matcha and beetroot.” He won’t divulge how blue beer is made though: “I won’t talk about blue, it might be a trade secret.”

Starting his own business has not been without its challenges, “I’ve often questioned whether I had the amount of confidence it takes to do this. It’s taken a long time for me to start believing that I know what I’m doing and that I have a good idea. The crowd funder and the outpouring of support from businesses that I idolise, like Lost Boys Pizza and The Dev, has really helped. As a business owner to have other small businesses be excited for you is the cherry on top.”

What does Rich like in a beer? “This is going to ruffle some people”, he warns me, “but I like clear beer that you can generally see through, a good mouthfeel and it shouldn’t be too thin. It has to have bitterness but it also has to be balanced.”

When it comes to his favourite pubs in Camden, Rich shouts out BrewDog Camden where him and his wife enjoyed drinks after they got matching tattoos the weekend they met. He also loves The Black Heart and The Rose & Crown. As lockdown restrictions ease, he is excited to get back together with the Mikkeller running club and enjoy Lost Boys’ notorious black pizza. His favourite memories in Camden revolve around seeing Frank Turner play at places like the Hawley Arms and bumping into him at The Monarch. “Just being able to see any live music again will be great.”

Rich hopes that the pandemic makes people re-appreciate some things. “Pubs get taken for granted, and they don’t get treated right. A pub is not just for Christmas! And you don’t have to be getting drunk in them, you can eat in them, you can meet friends at them, you can still support them. And the same with live music venues and bands and musicians. The arts and breweries took a beating due to not really getting much government support during the lockdown so I really hope people support the arts and small businesses.”

To support Rich’s exciting vision visit his Crowdfunder. “We’ve got all sorts of rewards, everything from an exclusive t-shirt designed by Allan Graves at Haunted Tattoos, to beer discounts, or you can just donate.” Follow Werewolf on Instagram to stay up to date.