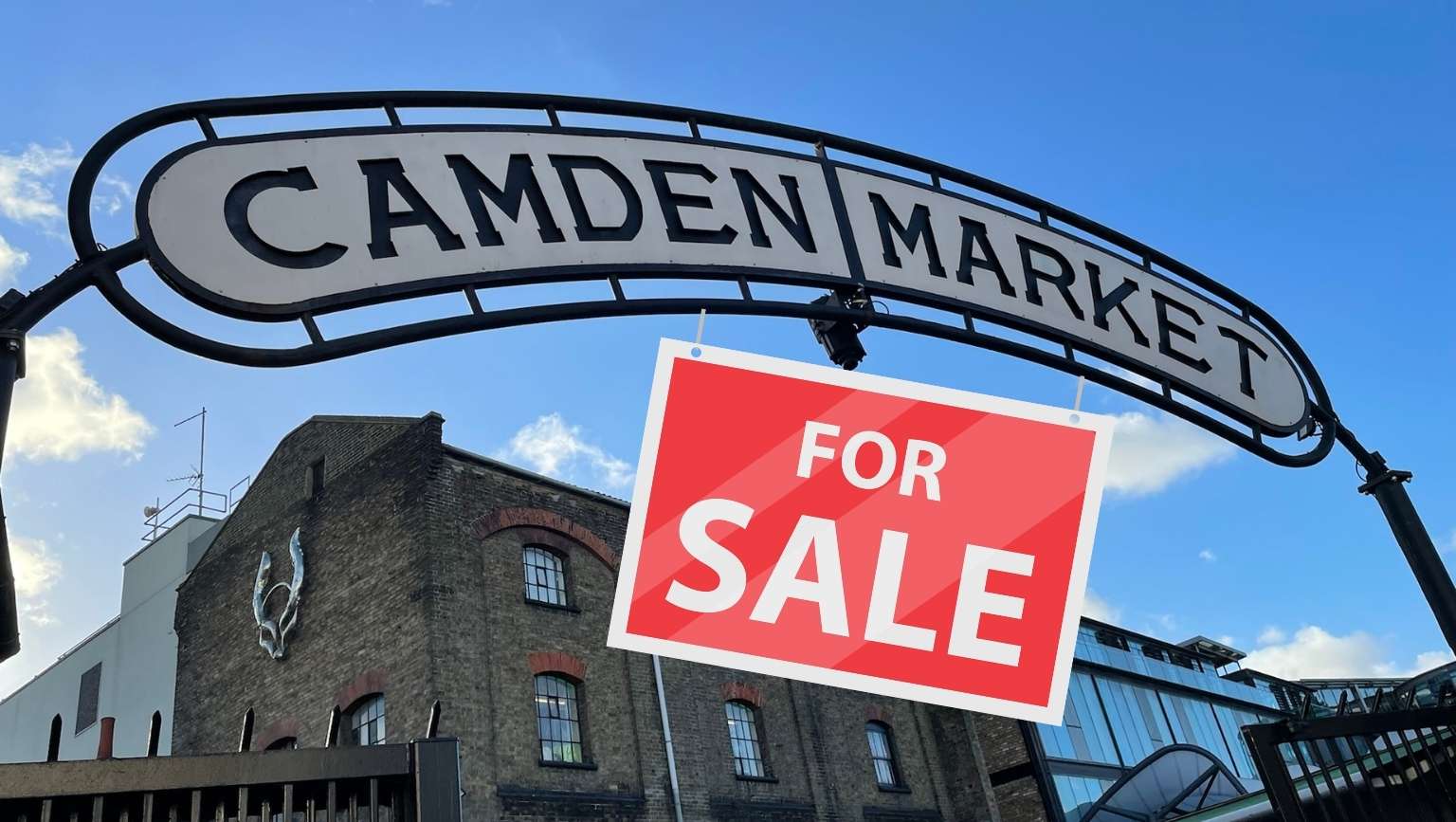 Camden Market is for sale and everyone has an opinion

With owners Labtech reportedly seeking £1.5bn for their iconic London asset, mixed passions about this place have been stirred, as per usual

The latest twist in the 50-year-old story of Camden’s famous Market unfolded over the Jubilee weekend as news broke that the current owner, Israeli-owned real estate giant Labtech, is looking to sell. Everyone has an opinion about Camden Market for sale.

Predictably for such an iconic cultural, creative and commercial landmark, everyone has a strong opinion on this story. Wander around the place this week, or (shudder) cast a quick eye at the online chat, and the sentiment you’ll hear ends up mostly negative. Yet all the proclamations as to why Camden Market being up for sale is A Bad Thing™ soon become amusing in their conflicting angles and diversity of thought.

Having written about all things NW1 for many years, I’m aware of this endless dialogue and its propensity to flare up around the same confused themes. Londoners’ opinions on Camden are always a bewildering mix of nostalgia for a golden era that didn’t really exist, combined with a contempt for the trappings of that very same time, all alongside a hatred of change, yet also an assertion that the current setup is rubbish. Oh, and that the future looks even worse.

The only thing anyone seems to agree on is that they alone knew when Camden Market was truly great because that is when they were hanging out there, back in the good old days.

And then you hear the refreshing voice of anyone under 16, or someone from overseas, and they always think it is absolutely wonderful exactly as it is. Just don’t let them spoil it by asking their opinion in a couple of years’ time, as they’ll no doubt bore on about how you should have been there in 2022, before it was all ruined and commercialised.

In amongst all this highly emotional noise, a few more grounded facts swirl, if you care to pause and take a deep breath. People are notoriously bad at accepting that everything – particularly our cities – is in a constant and necessary state of flux. Those disappointed voices who lament the loss of kaftan-clad stallholders with trestle tables of Indian knickknacks brought back from the hippie trail? They don’t actually wish the Market, and London itself, had remained stuck in the grim old 1970s. If they’re honest with themselves, they wouldn’t be rushing down there this weekend to buy another mini Ganesh statue and a tray of terrible fluorescent sweet ‘n’ sour noodles, even if the halcyon days returned, so what has actually been lost to the forces of change other than a clutch of hazy incense-infused memories?

If these staunch Camden nostalgics really followed their point about authenticity through, they’d be demanding the return of working horses to the historic stables, rather than the antique dealers who replaced them. They also seem to overlook how undeniably nicer the whole place is today, now that the dripping railway arches have been scrubbed up, the unregulated food pitches with their perilous open flames and gas cylinders replaced with proper modern facilities.

On the flip side, the people who loudly declare that the Market isn’t worth visiting as it’s just full of cheap tat, tourists and knockoff band t-shirts, they too seem unable to comprehend the passage of time, apparently believing the area has indeed somehow been stuck in an unprecedented timewarp. They’re not bothered that Camden Market is for sale.

Alongside those conflicted battles of false memory, there are others who jump to the odd conclusion that the sale of the Market means the area is doomed to be flattened and replaced by luxury flats, or swamped with bland retail chains. This strand of thinking totally ignores the millions Labtech has invested in –  and made from – one of the UK’s most popular, Grade-II listed visitor attractions.

The company were in fact responsible for purchasing a rag-tag collection of seven different markets with different owners, previously all competing to be the main attraction. Today’s eye-popping £1.5bn asking price is for precisely this value as a world famous destination, now with added coherent forms of organisation. The occasional unfortunate arrival of an odd branch of Sports Direct or the current repurposing of former market space for immersive games and themed shows is more down to society’s changing tastes than it is a plot to carve the soul out of the area.

Meanwhile, despite some sad departures of cherished long-time stallholders over the years, the Market today is still choc-full of outstanding designer-makers and eco-friendly craftspeople. The food offering is world-class, and big changes like the completion of the Hawley Wharf development have breathed genuine new life into the neighbourhood, including community assets like Curzon cinema screens and weekly produce markets.

Perhaps it’s the fault of a romanticised view of Camden’s past, something which remains so strong in our culture, that means many people can’t/won’t go out and to discover and celebrate what’s good about it these days. The lost bohemia of Withnail and I, the over-documented excitement of the Britpop era, or the excitable eulogising of the not-so-distant 2010s in the BBC’s current TV adaptation of Everything I Know About Love, all celebrate a Camden Town that has somehow been wilfully, maliciously swept away.

Labtech may have physically united, spruced-up and then placed Camden Market up for sale, but who really ‘owns’ a place with such a proud cultural resonance anyway? Judging by the strength of opinion, we feel like we all do, otherwise the compulsion to spout tired cliches and wrong-footed assumptions would simply fade away.

Brand Camden might be claimed by the Market (aka Camden Lock), the Brewery, or the Council, (hell, we’ve even co-opted it into the name of our own media platform), but really it is a canvas upon which we project a rich cultural legacy, one steeped in music, fashion, art and the entrepreneurial spirit of market trading.

Whether Labtech ultimately sell up or not, and whoever the next lot of big players are in this ever-shifting landscape, we’re all privileged to be able to witness this famous part of London move inexorably onwards.

The many who proffer passionate opinions about it, but especially the dour not-as-good-as-it-used-to-be Londoners, should relish all these preserved Victorian industrial yards that have seen over the years. With the prospect of things like the Camden Highline yet to come, the future is actually looking really positive.

If you enjoyed this article, visit Camdenist for more.