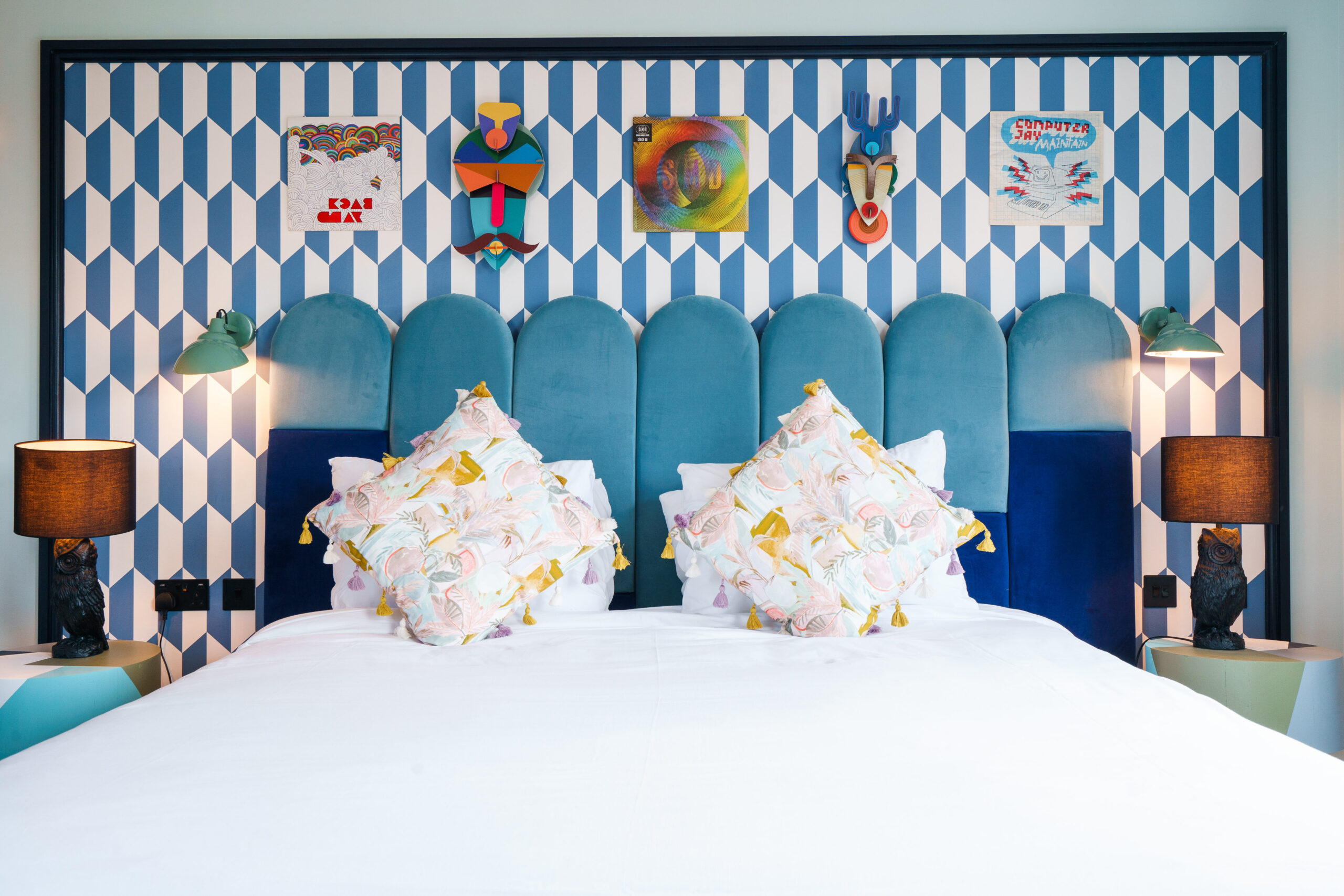 Rosie McCrum spends a night at Chalk Farm Rd's hip new hotel and its plant-based restaurant. Try it quick, before the word gets out.

Selina Camden is the newest, coolest kid on the block. On the corner of Chalk Farm Road opposite the Roundhouse, to be precise, the hotel (one of five Selinas in the UK, and over 80 worldwide) has positioned itself as the place to stay after a night spent soaking up Camden’s famous live music scene. The interior has been designed with this in mind, with album artwork on the walls and a working jukebox and vinyl collection nestled amongst staggered seating that also functions as an in-house cinema space.

One of the best things about the Selina chain is that despite being an established global player, they really embed themselves in the local community where each hotel is based. At the Camden reception you can find a mini shop where local artists and makers can present their creations. At the time of our stay, Unfolded – a sustainable local brand who make products out of paper pulp – took centre stage.

As lockdown eases further, the hotel plans to host events in their basement and terrace spaces, as well as tours around the local area. Walking round the hotel we bump into head chef, Harj Ram, of Powerplant, Selina’s inaugural plant-based restaurant, who does an understated peace sign at us before mysteriously disappearing. When we tuck into his food later, that calm yet playful energy is translated into every bite.

After my biologist date has ascertained that the many plants are in fact real, Keri Seymour, the sparky and welcoming GM, whisks us over to the bar, which boasts an impressive array of London-based gins and other spirits. I go for the Crazy Gin, which blends traditional lassi flavours with British gin. But the party has only just begun. From the kitchen emerges plate after plate of surprising and delicious food. To start, we try the delicately presented but powerfully flavoured Pani Puri and I’m almost certain that the tamarind sauce does a little dance on my tongue. Then arrive the polenta chips. These don’t promise much in name, but they are both decadent and comforting, especially once dipped in the truffle mayonnaise. The final starter is a smoky aubergine tartare, dotted with rose petals, pistachios and vegan ‘feta’.

Later, we try the Berber jackfruit burrito, which the meat-eating biologist is delighted, if a little unnerved, by. Who knew vegan food could taste this good? The pillowy dosa is a unique spin on a traditional burrito and the perfect home for the succulent and flavoursome jackfruit nestled inside. The wild mushroom paratha is wonderful too, rich, meaty and regal atop its flaky pastry throne. For pudding we fight over the tropical mess: creamy whipped lemongrass starred with cacao crumble and lifted by a fruity mango ice cream.

Decidedly full and slightly sleepy, wandering back to our room upstairs feels like being backstage at a gig, although it smells a lot better, as GM Keri points out. Metal grids crisscross along dark ceilings, punctuated with coloured lights. When you emerge from the maze there’s a marshmallow of a bed waiting and, from many of the rooms, views of one of London’s most iconic neighbourhoods. The hotel has spaces for every eventuality including cosy micro rooms, for singles or a couple on a budget; hostel style rooms with generously sized, cleverly designed bunkbeds; hybrid/family ones combining bunks with a double bed; and suites. All are eclectically decorated with a different colour scheme on each floor, animal themed lamps and colourfully tiled bathrooms.

Whether you’re a family looking to explore Camden for the first time, a Londoner in need of a stylish but comfortable nest a short stumble from a night spent dancing, or a local looking for a calm yet functional co-working space, Selina Camden feels like the obvious choice.

Visit Selina’s website for more information about rooms, menus and events,,Selina website or just walk in. We’d love it if you mentioned Camdenist.