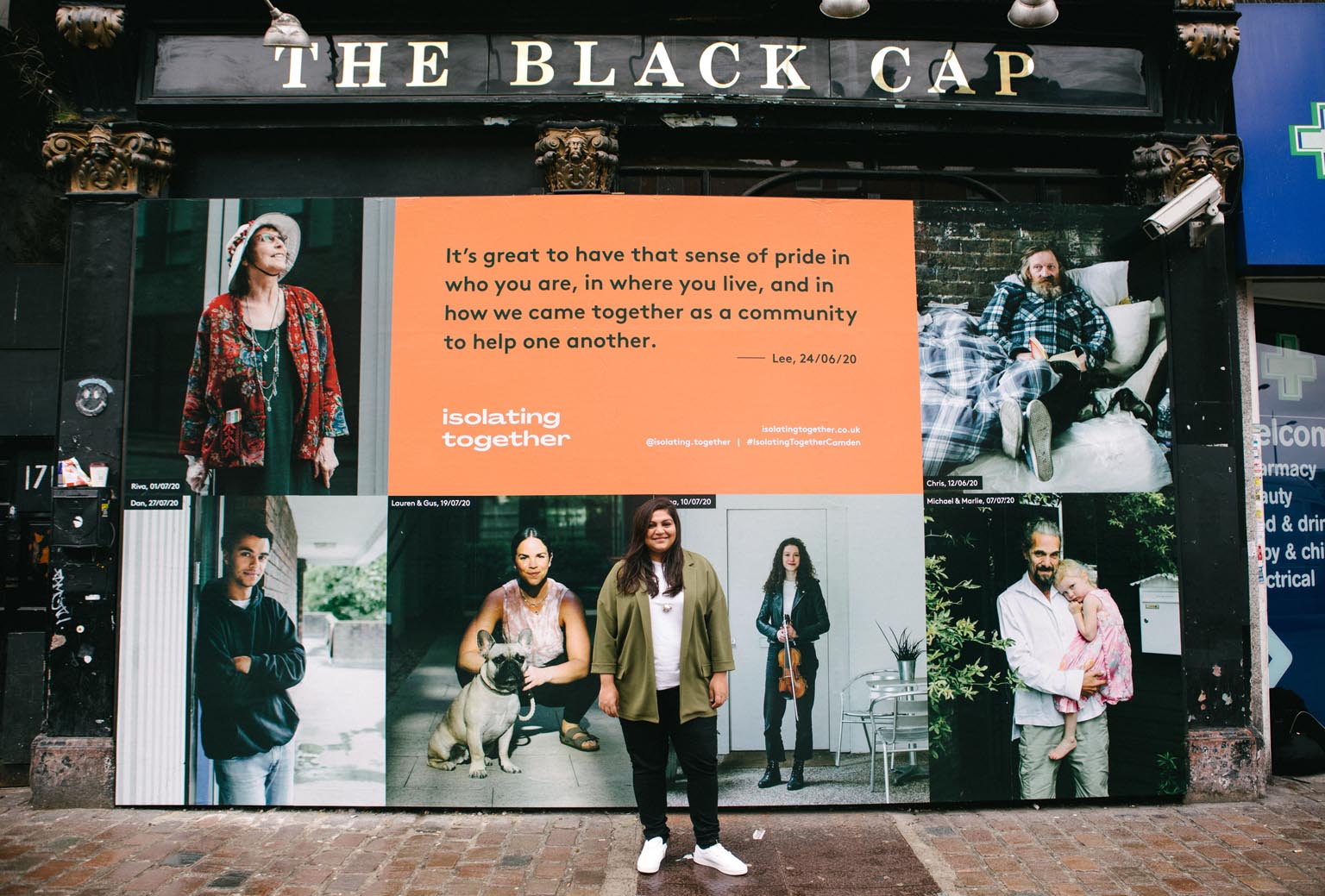 Local photographer Karishma Puri took a series of socially-distanced portraits in 2020, capturing the resilient spirit of her neighbours
CAMDEN PEOPLE
Why Read This?

One year ago, when the PM finally sat down in front the nation to issue the inevitable command, “you must stay at home”, millions of us took stock of our new reality – and decided what on earth we’d do next. There was a deep desire to help others, revealing a community spirit that had seemed long forgotten, and longside the enthusiastic delivery of food parcels came an explosion of creativity, from baking and sewing to rainbow art in every window.

Kentish Town resident Karishma Puri started up the hugely active local Mutual Aid group, which also led to her own creative endeavour, the portrait series Isolating Together, which can be found on public display in shop windows and on billboards throughout the area over the coming weeks.

“About 3 months after setting up the Mutual Aid group, the coming together of the community felt really powerful,” she says. “We were able to support one another faster and more efficiently than the government was able to. I’d spoken to at least 100 members and learning about each person’s story made me realise what a diverse lot we had just in this one WhatsApp group, and thought I had to document this.”

A keen photographer as well as graphic designer, she took her camera out in the mercifully endless sunny days of that first lockdown and shot a series of portraits at a social distance. Quickly amassing a beautiful collection of candid images, she also was able to open up a window into the personal experiences of her neighbour’s Covid-enforced isolation, too.

“There was a family that had to flee their home and were placed in a hotel,” she remembers. “When lockdown was announced they were suddenly moved into an empty flat with no amenities. The mum reached out to the Mutual Aid group for basics such as a mattress, duvet, microwave, heater and hob, and within the hour people had organised to have these items picked up from various homes and delivered to the family. There was even a cooking schedule for home cooked meals for them till they had a more permanent solution.”

Alongside some familiar local faces, such as Michael the hairdresser-cum-gallery-owner, and Chris who lives rough under the railway arch at Kentish Town West, Karishma also made new friends as her worlds of Mutual Aid and photography combined.

“In terms of survival, there’s an incredible Somali lady I met who told me how her community had been suffering due to the pandemic,” she says. “Overcrowding in homes, children with no laptops to access classes and of course the financial burden of it all. On top of that, the media were attacking minorities, blaming them for being overweight and not understanding nutrition, when eating healthy felt like a luxury. Despite her own challenges, this lady decided to do something to help. She would end up orchestrating a support system within her community which ensured people had a steady supply of free fruit and vegetables.”

The coming together of the community felt really powerful...I had to document this

In many ways, the social make-up of Camden depicted in her portraits defies the national narrative around things like race, class and the very definition of community. Now, with the stoic, smiling faces of our neighbours emblazoned all down Kentish Town Road as art, we are reminded of the spirit of Camden during the Covid era, but also that the same spirt existed before, and will do after, too.

“Of course people came together all over the country to support one another,” says Karishma, “but we did it in our own special Camden way – with rebellious grassroots action. This area certainly has a soul like nowhere else I have experienced in London, and because of the diversity we were able to come at the challenge of Covid from so many angles and perspectives.”

The strength of our brilliant mish-mash of cultures and peoples is seems almost efortlessly depicted in the simple portraits and accompanying stories, but getting them on public show has involved a huge amount of graft.

“The greatest challenge by far was the ever-changing situation with lockdown,” laughs Karishma. “Do we set up the exhibition and encourage people to engage with their high streets again, or design it to be viewed as they do their daily chores? The goalposts were constantly changing, but what made it simpler was the timelessness of these stories. It’s a beautiful moment that came out of dire circumstances, and I hope the messaging here will remain forever relevant.”

“My biggest aim for this project was to be able to amplify these stories on a large scale all over the neighbourhood,” Karishma says, “which I believe this exhibition has achieved. It’s a great way to mark one year of lockdown and reflect that despite hardships, some great bonds were formed. The portraits show human spirit at its very core – stripped back without the stresses and chaos of everyday life, we were all able to open up and connect.”

Isolating Together, in collaboration with No Ordinary Experience and JACK ARTS, is on display from Monday 22nd March for 10 days. See this map to take a guided tour of the portraits and for more details on the show, and tag #IsolatingTogetherCamden and #Camdenist for us to share your shots of them