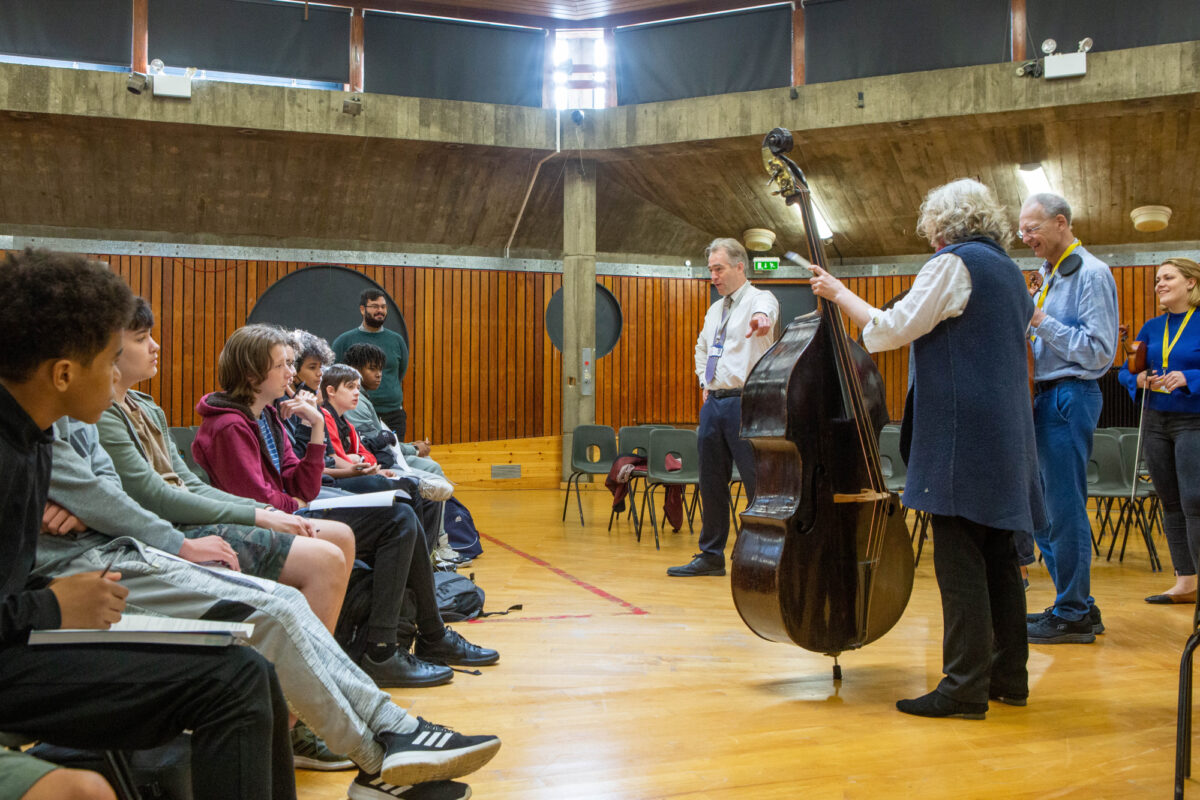 An Orchestra Walks Into a School…

Camdenist speaks to Acland Burghley School and the Orchestra of the Age of Enlightenment about their unique partnership
MUSIC IN CAMDEN
Why Read This?

“The children had learnt something, that the universe they inhabited was bigger than they could ever have imagined”, the narrator slowly shuts his book. We’re watching the end of The Moon Hares, the community opera performed by pupils from Acland Burghley School (ABS) alongside Gospel Oak and Kentish Town primary schools, and the Orchestra of the Age of Enlightenment.

Having already run workshops with over 700 children at the school, the orchestra’s collision with ABS has expanded the universes of hundreds of young people in Camden, as well as teachers, parents, and the musicians themselves.

Nick John, Acland Burghley’s head teacher, reflects on this gift of cultural capital, “it’s a way of closing the gaps between students and improving the educational offering for everybody,” he says. “To host such a wonderful organisation in Camden is a great privilege.”

As anyone who has been a teenager will know, growing up can be a tumultuous ride. “It’s as exciting and invigorating as ever,” continues Nick, “but it’s a challenging world. The idea that you can prepare for things is being blown out of the water; you have to be a lifelong learner, able to adapt and change all the time.”

He explains how the arts can act as a remedy of sorts, “creative dispositions – inquisitiveness, perseverance, collaboration – can enable young people to find their way through life’s complex problems.”

One Year 11 student tells us how taking part in The Moon Hares did just that. “I didn’t really like talking to people. Being involved in this project meant I had to talk. I got to know people and then I became more comfortable speaking. It was a way of breaking through.”

Music can be an invaluable emotional outlet, as another Year 11 pupil reveals “I think a lot of kids find it difficult to express themselves, and music helps us do that.”

Cuts to the arts sector are making this form of self-expression increasingly difficult to access. Although orchestras and schools cannot solve this problem alone, Cherry Forbes, the OAE’s Education Director, is adamant that through continuing to offer what they can, the orchestra can bring some magic with them. “Then if that magic spirals, it can show others how important music is in the curriculum, from academic prowess to wellbeing.”

A pupil in Year 10 with additional needs describes how this magic feels for her. “It cheers me up when I’m down. Being part of the orchestra has made me really happy.”

What has the impact of the move been so far? “We’ve called this Year Zero because it was meant to be the big launch year, but Covid has slowed it down,” says Nick. “I think it’s probably even harder being an orchestra in lockdown than it is being a school. Every time I started to feel sorry for myself trying to run a school, I’d just look at what they’ve had to deal with.”

So how has the OAE coped? “Our word this year has been ‘flexible’”, Cherry tells us. “We never say this is it. It’s just these are the possibilities. Then we build scaffolding and from there it can go in any direction really. I’ve also had to clean a lot of music stands – they’ve been starting to rust.”

Growing up in Camden is a rich education in itself, Nick explains. He describes the crossroads near the school as emblematic, “you can come from anywhere and you’re not going to look odd because anybody can fit in.” ABS is a deliberately comprehensive school, with an emphasis on including as broad a coalition of children as possible. “We want to be the right school for the local community.”

The orchestra also seeks to be wide reaching, working with everyone from toddlers to teenagers to the elderly, including deaf children and children at special schools. “We celebrate ability, whatever that is. It’s fantastic when everybody has a level playing field”, Cherry grins. “We make a point of taking as much care over a workshop with a very young child as we would with a concert at the Royal Festival Hall.”

It’s not new news that the pandemic has revealed pre-existing disparities in the community. “In education, we’re always working to see how we can provide equality of opportunity and this year has sharpened our skills and knowledge in a way,” Nick explains. Can access to music act as an equaliser of sorts?

Cherry nods, “it’s a huge leveller. Music is wonderful because it’s not reliant on language. Somebody who can’t speak or can’t hear, or might have a physical difficulty, or might not have English as a first language, can still join in.” For the orchestra, it’s about finding the right way to communicate with every kind of person. “Whether it’s an academic or a child who can’t hear, there is always a way in. And I’m fascinated by finding them.”

If there’s one thing educational work has shown Cherry, it’s how musical everyone is. What has Nick learnt? “It takes seven years to get from 11 to 18 years old, every time. It might sound obvious, but I’ve watched 23 years of students and you start to recognise patterns. We have to be comfortable with personal growth and allow the ups and downs to happen. That’s what’s so exciting about it. You look at some of the Year 13 children as they’re about to leave and you might think, how on earth did they make it? But of course, they did. It just takes the time, every time. We should enjoy the process of growing up and take pride in it as a community. School is a collaboration between families and professionals.” And does he have any advice for his own teenage self? “Just don’t worry. Stop worrying. That’s my advice for myself age 46 as well!”

Find out more about the OAE/ABS partnership, which is made possible by generous funding from the Linbury Trust and a syndicate of individual donors.