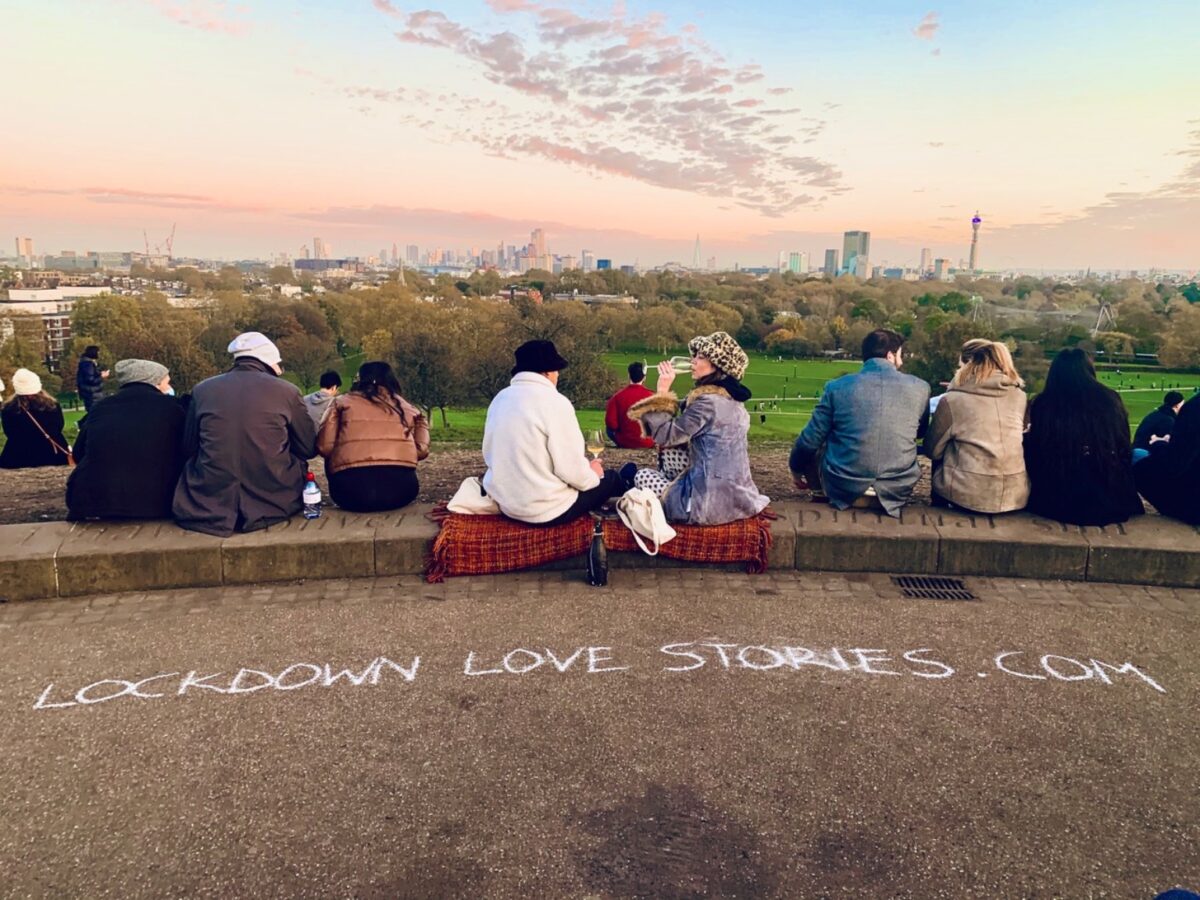 Physical relationships and desires were conspicuously ignored by the UK's Covid rules, but a guerrilla-style art project has revealed how our drive for intimacy adapted
CAMDEN PEOPLE
Why Read This?

If you were into taking your government-sanctioned exercise outings to the park during lockdown, you’ll most likely have come across a URL chalked on the pavements and paths: lockdownlovestories.com.

Philippa Found’s participatory art project asks for anonymous submissions that collectively tell the story of how we have loved (and haven’t) during the pandemic. “It’s a portrait of this moment”, Found says, “which ties together writing, art, documentation, time capsules and telling stories, particularly women’s stories; all of my interests, really. I also just adore love stories. I’m a hopeless romantic.”

Since building the Lockdown Love Stories website a year ago, Found has received more than 950 anonymous submissions. When it all began, she was faced with the challenge of reaching people at a time when our familiar ways of connecting were severed. “Without people knowing about the project, there is no project”, Found explains, “it relies on people’s stories.” Inspired by her then three-year-old drawing on the pavement with chalks, she began chalking the website URL across Camden, communicating with people in the one place they were allowed to go: their local parks. “It’s the most direct way to reach people at a time like that. It’s ephemeral, it’s going to disappear, but it’s a trace that shows someone else is out there, that there’s a space where everyone’s welcome. So come and find it.”

The process of chalking became a way for Found to stay connected to her community, “it reminded me how much I love spontaneous interactions”, she says. As an artist or writer she generally spends much of her time alone, “it’s just you and your thoughts, your computer, or whatever.” But when she was out chalking, people would stop and talk to her, creating a feeling of togetherness during a time that, for many of us, was characterised by isolation. “It’s sort of been the flipside of everyone else’s lockdown experience in that I’ve actually met so many people.”

It reveals a lot about our collective state right now that her project has become so popular from such humble, organic local promotion. “But everyone loves love, don’t they?” she suggests. “And at a time when we were starved of being able to go out and have these experiences, we became really hungry for them.”

From the beginning, she was keen to make the project anonymous in pursuit of the truths we normally hide. “It’s those hidden things that can make us feel isolated when we think we’re the only ones who’ve experienced them.” The isolation that lockdown brought with it only exacerbated these feelings for many of us, so Found wanted to do something to connect people, to offer up a remedy for this specific kind of loneliness. “I think by reading other people’s really intimate confessions, when they’re so relatable, creates a sense of connection. People have found a lot of reassurance in that, and hope in the happy stories as well.” There’s also an element of dismantling shame in Found’s project, “anything people thought was just them, finding out that other people feel and do exactly the same things is a source of comfort. There’s something quite reassuring in knowing that our stories and behaviours aren’t that unique after all.”

At a time when we were starved of being able to go out and have these experiences, we became really hungry for them

Performance: ‘If I Feel Lonely, Maybe U Do 2?’ By Travis Alabanza and Danielle Brathwaite-Shirley.

Song: ‘An Evening I Will Not Forget’ by Dermot Kennedy. “It has a Lockdown Love Stories vibe.

When Found set up the project she thought it was going to be all doom and gloom. What she hadn’t anticipated were the positive stories, “I guess I’d been thinking divorce spikes and everyone fighting, so the stories of people in long term relationships using the time to reconnect with each other were unexpected.” Her favourite stories are those that are deeply felt but that aren’t trying to make the reader feel anything, “just quiet, understated, but really powerful.” The bittersweet ones also move her. A favourite is ‘Lockdown Lovers’, about two people who reconnected during lockdown and spent it together. “They had a wonderful time but felt it could never translate into the ‘real’ world. It was just this microcosm that only existed in lockdown. There’s something really poignant about that.”

How would she describe being in love? “This doesn’t just apply to romantic love as I feel this about certain friends as well, but I think there are some people that walk into a room and light it up and make everything better and exciting, just by being there. I think that’s what being in love is.” I ask her what advice she would give her eighteen-year-old self when it comes to love and relationships. “Be braver. Just care less. Literally give less fucks.”

Philippa’s creative practice tends to focus on desire, shame and power dynamics, including the ways in which women are oppressed by the ‘hysterical woman’ archetype. She cares deeply about telling women’s stories and redressing the imbalance of representation in the arts. “We still live in a patriarchy: the male position is the default. It’s crucial we take control of our narratives, when we haven’t historically and aren’t currently in control of them. It’s about ownership and agency.”

The majority of the Love Stories are by women and, in a way, the project is a source of relief from patriarchal versions of who women are told they should be, such authentic storytelling dismantles idealised caricatures of femininity. “Having enough narratives out there that are nuanced shows there’s room for every type of experience. Right now, the idea of self-love and single, empowered women is really popular. This is obviously great because it’s reacting against oppressive structures, but I also think it’s important to allow space for everyone’s preferences and ways of living to be equally valued.”

Eating out: “Patron on Fortess Road is one of my favourite places to go out for a proper dinner.”

Coffee: “I get mine from Mamasons (the ice cream cafe) on Kentish Town Road every morning. I love it there.”

What’s next for Lockdown Love Stories? Now it has momentum, Found is looking for new ways to get the stories out there. “Lockdown has had a massive impact on retail and there are so many empty shop spaces right now. I would love to use these and engage with the city as a gallery space.” Just like when she began chalking around Camden, she asks herself, “if galleries are closed, what can I use to get the work out there and how can I translate it into different art forms?”

And what has she learnt from love? “I just think love is fundamental. Everyone needs as much of it or more of it in their lives as possible. All we have, really, is our relationships with people, not just romantic relationships, but friendships and everything. So be as open as you can, tell anyone you love them and tell them whilst they’re here. Don’t be afraid of it. Be brave.”

Find all the love stories on Lockdownlovestories.com and read a selection of the best ones on Instagram.