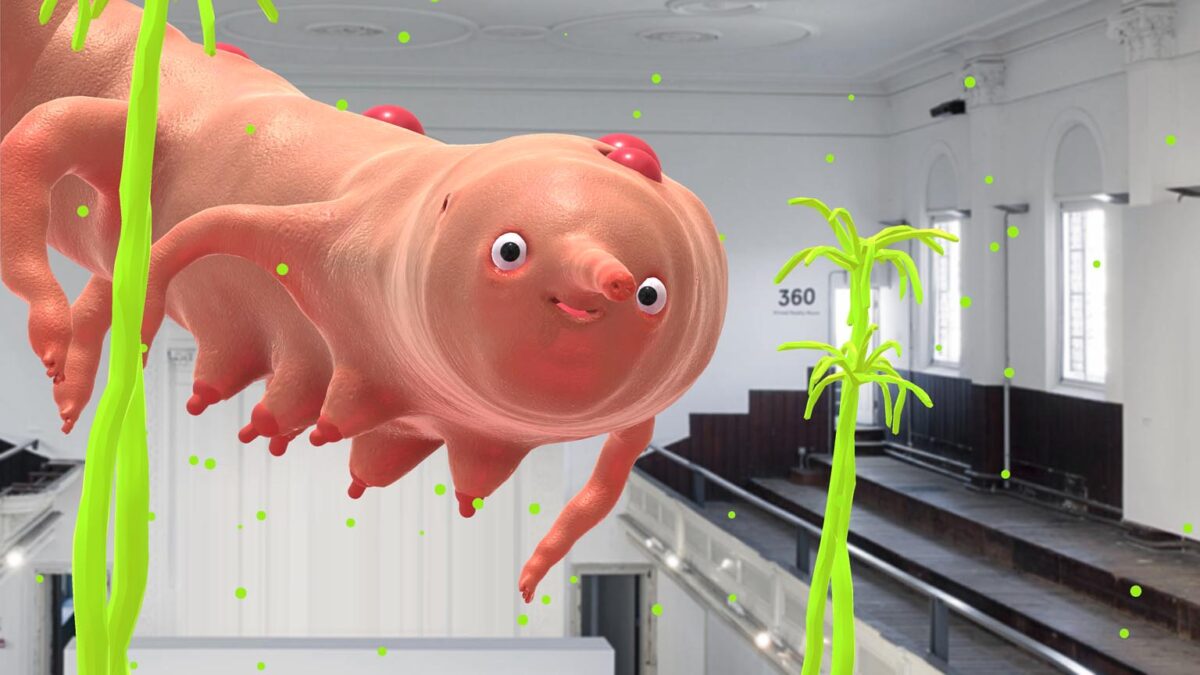 Among the Machines: we get thoroughly involved in the new show at Zabludowicz Collection

With phones dangling from our hands like extra limbs, the Metaverse winking in our collective periphery and Rishi Sunak clumsily clambering onto the blockchain bandwagon, the line between human and machine is rapidly disintegrating. Is our preoccupation with technology, such as artificial intelligence (AI), a mere dystopic self-destructive impulse, or an opportunity to grow a utopian antidote to the anxieties of the Anthropocene?

Among the Machines, the latest exhibition at Chalk Farm gallery Zabludowicz Collection, interrogates our confused relationship with non-human entities. Inside what was once a large Methodist church, a fossil-like form inspired by the extinct trilobite replaces candles and communion, rising up from the altar in creatural resurrection. Is this a miraculous visit from a future deity? Or has the particularly stubborn nit my mother ripped from my head in primary school come back to avenge itself? Neither. It’s Joey Holder’s Proetida, an augmented reality experience commissioned for the space.

The exhibition takes its name from Darwin Among the Machines, a satirical article by Samuel Butler published in 1893 that considers the possibility that machines are a lifeform unto themselves, constantly evolving and with the potential to surpass humans as the dominant species.

“The whole show is about this idea of how we deal with the fact that we’re being evolved beyond by technology so it made sense to include modes of bodily extension, such as augmented reality (AR), as part of an exploration of what happens when confidence in ourselves as the apex species of the world is destabilised,” explains Paul Luckraft, one of the exhibition’s curators. Meanwhile, curator Julia Greenway hands me an iPad through which a surprisingly endearing worm-like specimen invites me to milk its dangling udders onto other visitors, an unexpectedly gleeful experience.

Being in the main hall is a bit like being in a zoo on shrooms. On the walls are what Paul fondly refers to as “insect dildos”, AKA The Evolution of the Spermalege, Joey Holder’s 3D printed silicon sculptures based on insect genitalia and scaled up to human size. On a raised platform a praying mantis appears to be having an altercation with an elephant carcass. On closer inspection, Marguerite Humeau’s high-density polystyrene, resin and fibreglass sculpture depicts a matriarchal elephant-like being. Humeau spoke to a number of experts about how elephants might have evolved if they, instead of humans, had developed a larynx like we did 100,000 years ago as a result of the FOXP2 gene mutating. The result is a sculptural elegy mourning the loss of something that never materialised, a mammalian-alien hybrid that I find peculiarly moving.

A mammal that I do recognise lounges on a plinth next to the eleph-alien. Aleksandra Domanović’s Kalbträgerin (Calf-Bearer), depicts a calf gripped just above its hooves by cyborgian arms, a reference to one of the first robotic arms ever made by Rajko Tomovic in 1963. The calf itself is a nod to sixth-century BC Greek sculpture of Moschophoros. This is one of the more literal delineations of the tension between nature and machine in the show. “Things we think of as natural or timeless, or from the infinite classical antiquity have been shaped by technology too,” Paul reflects. “The whole of human society is itself a technological shift of nature. Domesticated cattle are human-designed to an extent, for example.”

The curators explain their desire to blur the distinction between the digital technology of today and how we’ve shaped our world over millennia. Rather than vilify technology, they instead wish to encourage a playful reflection on the possible implications of its inevitable evolution.

Although many of the species in the show look alien, there is a notable familiarity about these creatures. “In many ways, data and technology is a tool the artists are using to link us to the natural world. There’s this methodology of reconnection with nature via technology that is hopeful and exciting,” Julia says. I consider this whilst lying on my back in a dark room with a silicone LED womb twitching against my stomach and bat sounds in my ears. This wearable haptic womb is Bet(a) Bodies by Keiken, ‘an empathy and consciousness device’ that includes sounds and vibrations emitted by animals that communicate via ultrasound. In just a few minutes I’m no longer unsettled by the prospect of being pregnant with bat and rat foetuses. I feel like a bad mother when Julia takes my babies away.

What do Julia and Paul think the future of this technology looks like for the art world? “Oh, we’ll go and see shows in the Metaverse”, Julia shrugs, “but I’d love to see artists make their own platforms, their own digital spaces and languages.” Paul nods, “and I think our devices will become less prominent. Remember Google Glasses? I think ideas like that will re-emerge.” He also reflects on the potential impact of an increasingly automated world, one in which AI becomes a creative partner on projects. If artists collaborate with AI, a question around ownership emerges. There’s also uncertainty around determining value. “NFTs have questioned how we decide what holds value and what doesn’t. Is it the network it’s released onto, is it the artist’s backstory?”

It’s clear that we’re only just peering over the precipice when it comes to the future of technology and how using it as a medium, or even a collaborator, will affect our relationship with art and the planet. As Paul reminds me, I’m recording this interview on an iPhone; to an extent we are trapped by the structures we create for ourselves. “The exhibition isn’t necessarily saying we have to push back against machines and stem the flow of development, more that we should assess the implications at every stage. There are more productive ways to collaborate, ways that are better for the planet and our own psychic states too.”

Among the Machines is showing at Zabludowicz Collection until 29th July. Entry is free.

| Find out more at zabludowiczcollection.com |